State of the City: Santa Clara is Well-Positioned for the Future

SANTA CLARA, Calif. – Mayor Lisa M. Gillmor and the City Council invite the public to attend the 2019 State of the City events this month. Over the course State of the City: Santa Clara is Well-Positioned for the Future of three days, the events will take place at three Santa Clara City Library locations as well as a special senior luncheon at the Santa Clara Senior Center.

During each event, Mayor Gillmor will deliver the State of the City address in which she will highlight how Santa Clara is well-positioned for the future. Members of the Council will join her as well. City Manager Deanna J. Santana will provide an overview of the City of Santa Clara budget and discuss major initiatives.

New for this year’s State of the City is recognition of people and businesses of the year by district and citywide. The Mayor and City Council will honor a total of seven outstanding residents and seven businesses who give back to the community.

The City will also livestream the Thursday, June 20 event at Central Park Library, starting at 2:30 p.m., on the City’s Facebook page and YouTube channel.

For the latest details, visit the State of the City webpage.

For more information, contact the City Manager’s Office at 408-615-2210 or email Communications@SantaClaraCA.gov. 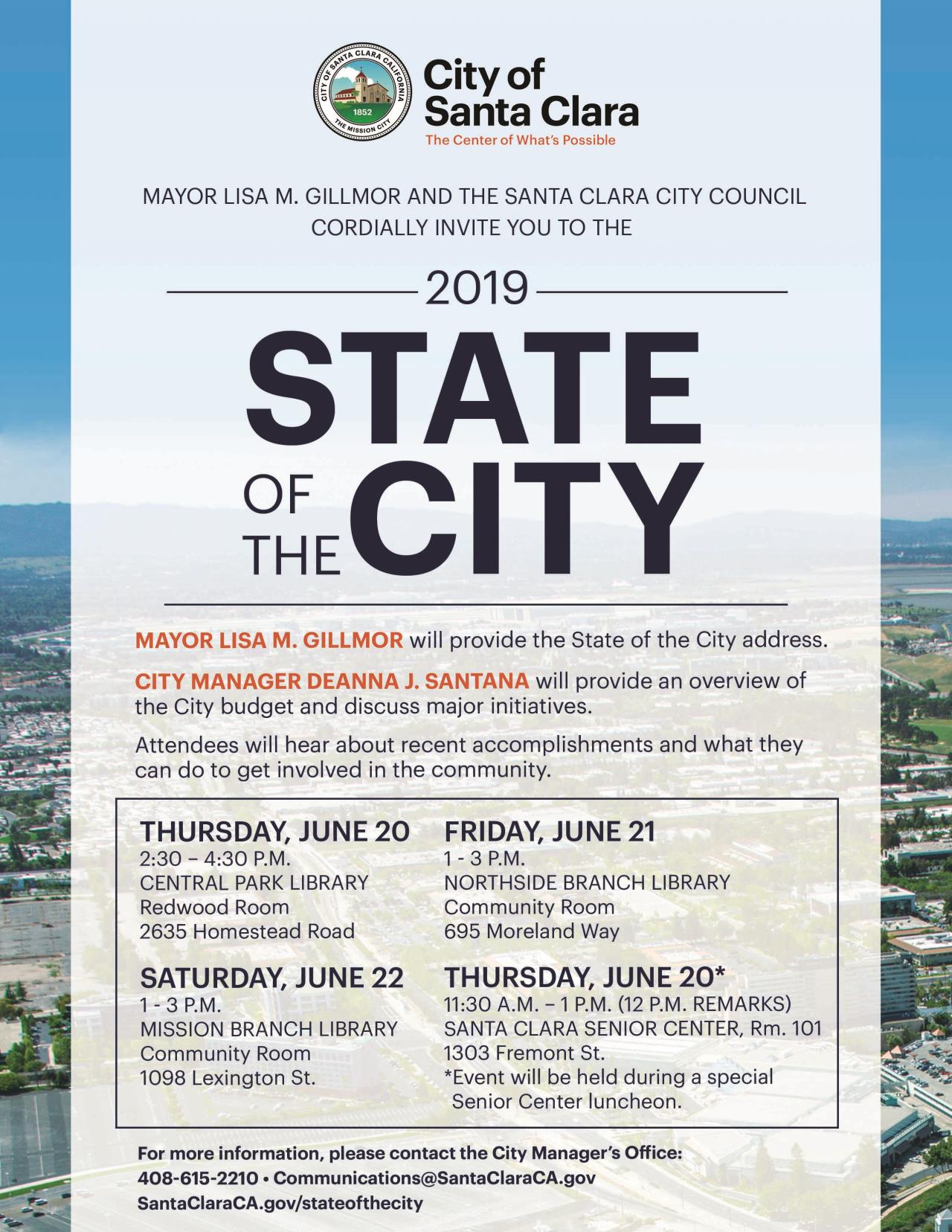 About the City of Santa Clara

Located at the heart of Silicon Valley about 45 miles south of San Francisco, the City of Santa Clara truly is “The Center of What’s Possible.” Incorporated in 1852, Santa Clara covers an area of 19.3 square miles with a population of 120,000. Santa Clara is home to an extraordinary array of high-tech companies, including Applied Materials, Hewlett-Packard, Intel, Nvidia, Oracle, and Ericsson. The City of Santa Clara is also home to Santa Clara University, California’s Great America Theme Park, and Levi’s® Stadium, home of the San Francisco 49ers and Super Bowl 50. For more information, go to SantaClaraCA.gov.