Educational Information on Measure A

Election information was provided as a public service by the City of Santa Clara in the form of three different educational mailers, which are available in multiple different languages below:

For the June 5 Statewide Primary Election, the City of Santa Clara has several locations available to the community to vote. See the complete list of locations and hours for Santa Clara polling centers.

On March 6, 2018 the Santa Clara City Council voted unanimously to place the Santa Clara District Election and Voting Method Measure, known as Measure A, on the June 5, 2018 ballot. Measure A will be the only measure on the June 5 Special Election, and will, if approved by voters, update the way Santa Clara voters elect local officeholders. Measure A was placed on the ballot following substantial community engagement from residents and grassroots input on the districts and voting methods.

Following the Charter Review Committee’s final recommendations, the Council established the Ad-Hoc Districting Advisory Committee, with the mandate of determining recommended maps for the City Council. As noted by the City Attorney, the Ad-Hoc Districting Advisory Committee worked within the Council’s directions and approved a recommended map that will be in place should Measure A pass in June.

The Santa Clara City Council placed Measure A on the ballot following its review of the Committee’s unanimous recommendations on how to update the manner in which local elections are conducted, and approval of the City Attorney’s proposed ballot language. Measure A was placed on the June ballot following extensive community input through two committees composed of volunteer city residents, who received input from hundreds of residents through the City’s 16 public hearings and online platforms.

Shall the City Charter be amended: to establish two districts starting in 2018 to be represented by three council members each; and when available, use ranked choice voting to allow voters to select candidates in order of choice to determine the winners of elections of all city elected officers?

If approved by voters, Measure A would update the way Santa Clara voters elect local officeholders as follows:

Establishes a voting process known as “ranked choice voting” for all city candidates for office.

The proposed district boundaries, to be finalized by the City Council on the May 8th, 2018 City Council meeting, stem from over a year of community engagement through the City’s Charter Review Committees and Ad-Hoc Districting Advisory Committee. At the Council’s direction, two commissions solicited and received valued community input over the course of 16 community hearings.

The Council proceeded with the Charter Review Committee’s recommended two-district plan as an effective means to increase Council diversity. The proposed district boundary map [insert link here] satisfies the two criteria for a legal map. First, the districts must have approximately equal population, and second, the districts must not prevent protected groups (such as Asian-Americans) from electing a representative of their choice.  As noted in the Charter Review Committee’s analysis, minority groups are not large or concentrated enough to ensure a diverse council outside of a two-district framework.

On the April 12th Ad-Hoc Districting Advisory Committee hearing, the Committee determined that the proposed district boundary map best accomplishes these two goals. Under the proposed Measure A system, minority groups are quite likely to elect a representative of their choice, should voters approve Measure A.

The Ad-hoc Districting Advisory Committee approved a district boundary map at their final public hearing on April 12. The map recommendation will be presented to the full Council on May 8 for consideration, as well as the accompanying requisite Ordinance for adoption.  The Committee recommended a map that results in a north district and a south district, running roughly along El Camino Real. The Committee also designated the south side of the City (defined as District 1 on the map) as District 1, which will allow voters in that district to vote in 2018. The north side of the City (defined as District 2 on the map) will be defined as District 2 and voters will vote on Council candidates in 2020. For more information on proposed maps or the districting process, please visit the Ad-hoc Advisory Districting Committee's webpage.

An interactive map has been created so that residents may enter their address to see which proposed District they reside. 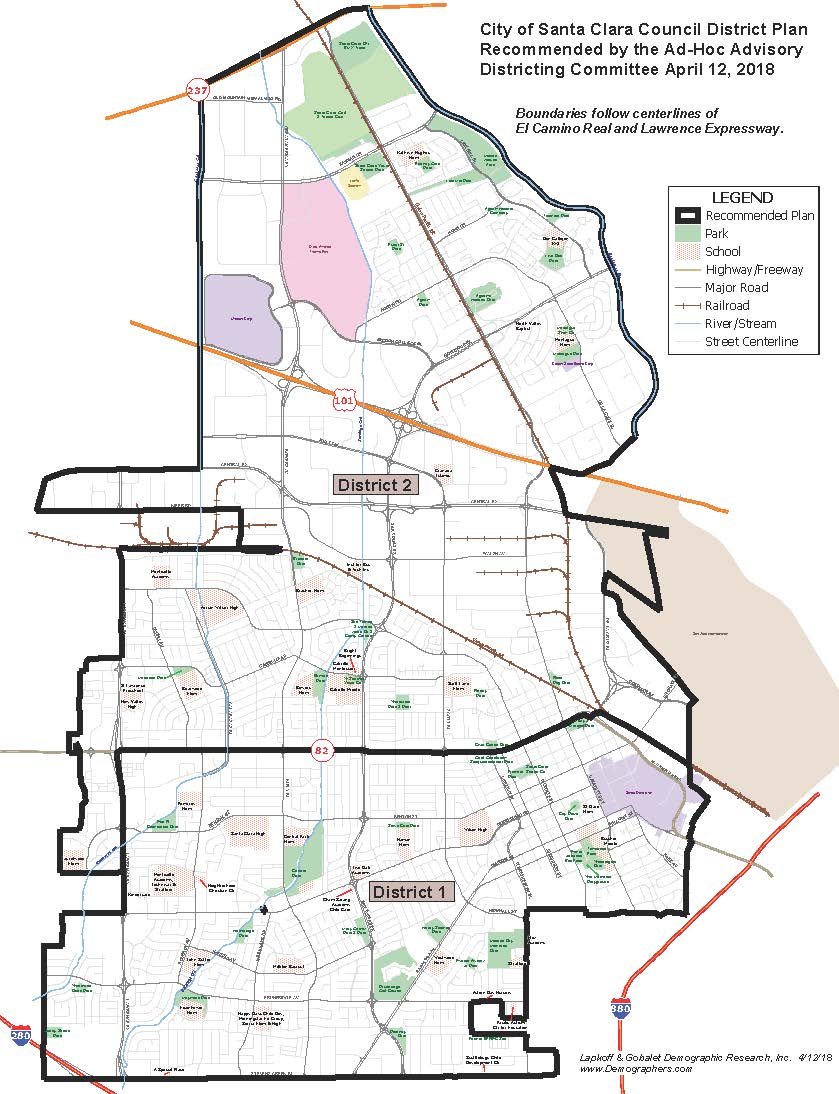 How can I get more information about Measure A or the Districting Mapping Process?

Argument in Favor of Measure A

Argument Against Measure A

Rebuttal to Argument in Favor of Measure A

Rebuttal to Argument Against Measure A

Measure A and District Election News

(7-24-18) Superior Court Issues Judgment Regarding the November 2018 Election to Designate Districts 2 and 3 for City Council Election. City Reserves Right to Appeal the Decision