The County of Santa Clara's Shelter-at-Home order remains in effect as some businesses and new activities are allowed to reopen with social distancing protocols and safety requirements in place. For local updates on the coronavirus (COVID-19) outbreak, visit SantaClaraCA.gov/CoronavirusUpdates.

The City has received several inquiries regarding conducting candidate forums for the November 2018 election, where Santa Clara voters will elect Council Members from District 2 and District 3, as well as the Mayor and City Clerk (partial term) on a City-wide basis. The City is providing this Question and Answers for the public’s awareness and to avoid misinformation that may have already circulated by members of the public.

At the September 11, 2018 City Council Meeting, the City Council directed staff to inquire with the League of Women Voters to host a forum for the two Ballot Measures: “Measure M City of Santa Clara Commercial Cannabis Activity Measure” and “Measure N Advisory Vote: By District Council Election.” Staff reached out to the League, but the League was not able to accommodate the request due to the volume of requests for candidate forums; however, the League will present a nonpartisan information session about statewide ballot measures on October 18, 2018 at the Central Park Library from 1– 2:30 p.m.

Candidate and Community Forums related to the November 2018 Election

On July 24, 2018, the Santa Clara County Superior Court issued an amended Court order addressing the issue of "sequencing" of elections. Candidates for City Council must be residents of Districts 2 and 3, and only voters in Districts 2 and 3 will be able to elect City Councilmembers in the November 2018 election. For background information on the Court Ordered district boundaries, visit www.santaclaraca.gov/districts 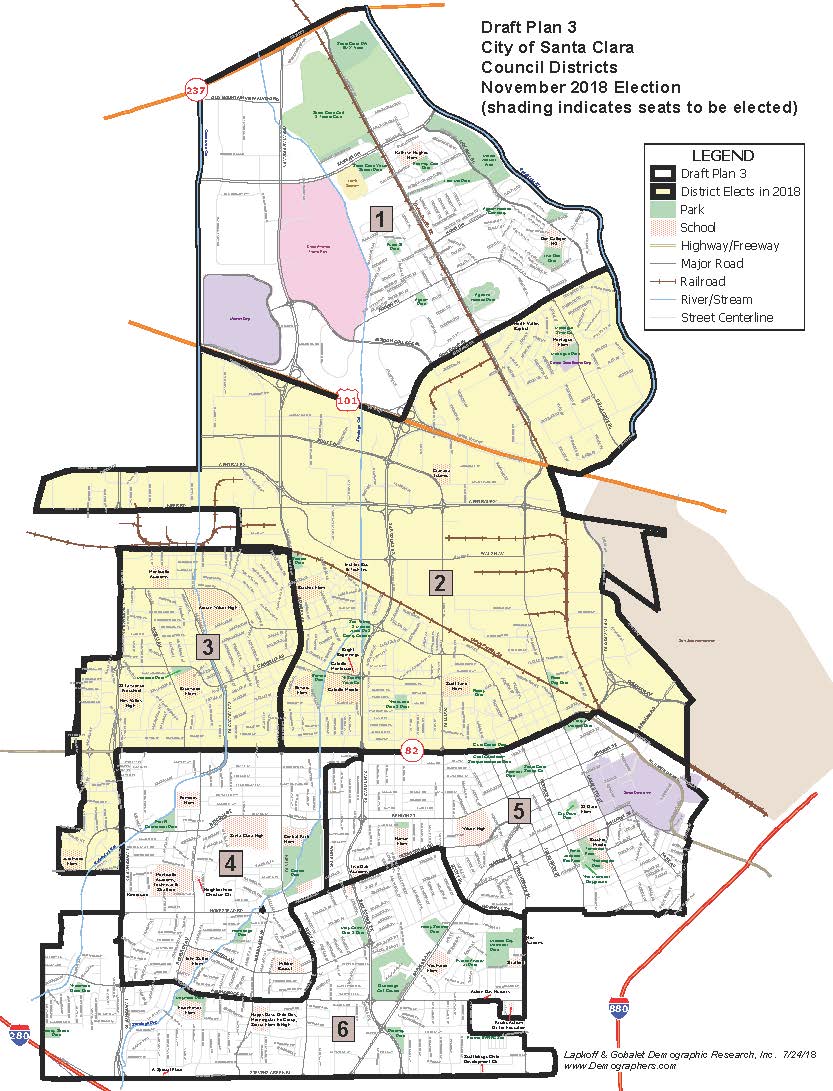 In July, the Council took action to adopt Resolutions to call a Special Election to submit two ballot measures to the voters of Santa Clara. The Advisory Ballot Measure (Measure N), which is non-binding, is to ask the voters whether the City should engage the voters in a public process to draft an amendment to the City Charter to change the method of elections from at-large to by-district for City Council Members only. Measure M is being submitted to the voters of Santa Clara and is known as the "City of Santa Clara Commercial Cannabis Activity Measure" regarding a proposed cannabis business tax.

That ballot questions read as follows:

Measure N
ADVISORY VOTE: BY DISTRICT COUNCIL ELECTIONS. Shall the City of Santa Clara engage the voters in a public process to draft a Charter Amendment ballot measure to elect its Council Members, other than the Mayor, by district?

Measure M
CITY OF SANTA CLARA COMMERCIAL CANNABIS ACTIVITY MEASURE: To maintain fiscal stability/essential city services, including rapid 911 emergency response times; preventing cuts to police officers/firefighters; repairing streets/potholes; maintaining library/youth/senior services, shall an ordinance be adopted establishing a tax on commercial cannabis up to 10% of gross receipts and up to $25 per square foot for cultivation, generating approximately $2,200,000 annually until ended by voters, with annual independent audits, and all funds used locally?

How can I get more information about Measure M and/or Measure N?

Argument in Favor of Measure M

Argument in Favor of Measure N

There will be various levels of voter information and outreach on district elections and the two ballot measures for the November 2018 election. This will include:

For more information, please contact the City Clerk's Office at (408) 615-2220 or email clerk@santaclaraca.gov.