The Santa Clara Volunteer/Reserves was established in 1854 when local residents formed the Columbia Hose Company. The uniform at the time consisted of a red shirt, dark pantaloons, blue cap trimmed with red and black patent leather frontpiece, with the name of the company, black belt with gold lettering and a metal badge.

In 1856 Columbia Engine #1 was formed and approved by city trustees. This company is now known as Hope Hose Company. By 1863, the town of Santa Clara began to grow with the founding of the Santa Clara Brewery. The town's people realized the need for more fire protection and, in 1872, the Hook and Ladder Company was formed. With continued growth and several large fires, in 1877 Mission Hose Company and Hose Brigade were formed. Three years later, Tanner Hose Company was formed. According to statistics, losses to fire had averaged less than $500 in 1895, which speaks well of the efficiency of the companies. 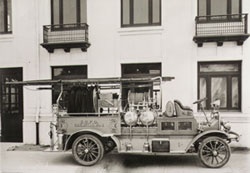 Between the years of 1904 and 1908 the individual companies merged to form the Fire Department. The six original fire house locations were retained but it was decided to form four districts. At this time all equipment was either hand or horse drawn to the fire.

In 1949, with the post-World War II growth, Santa Clara built the city's first fire station (and headquarters) at 1100 Benton Street. With this expansion came the hiring of the city's first paid firefighters. In 1951, the city took another big step by hiring the first paid chief. The majority of firefighting was still being borne by the volunteers.

Today, the City has 10 fire stations consisting of 8 engines, 2 trucks, 1 rescue/light unit, 3 ambulances, 1 hazardous materials unit, and 1 command vehicle. The Fire Department is comprised of 180 personnel and is supplemented by over 60 Volunteer/Reserve firefighters.
View Full Site