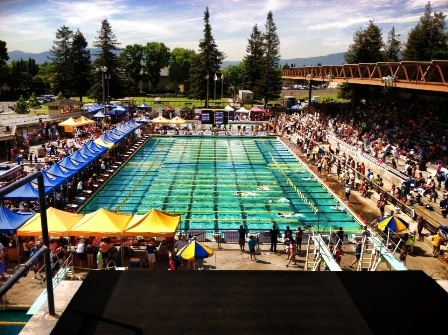 The George F. Haines International Swim Center is home to the Santa Clara Swim Club, the premier swim club in the South Bay, founded in 1951 by George Haines, considered internationally to be one of the best swim coaches in history. An article in USA Swimming's "Splash" magazine (July/August 2005 issue), written by Diane Spivak, talks about the legacy of the Santa Clara Swim Club, swim coach George F. Haines, and the City of Santa Clara's International Swim Center. Santa Clara's International Swim Center is also home to the world famous Santa Clara Aquamaids. The Aquamaids have produced more than 58% of all the Olympic Synchronized Swimmers representing the USA since synchronized swimming became an Olympic sport. Synchronized swimming emerged as an exhibition sport at the Olympic Games from 1948 to 1968, then debuted as a full medal sport in Los Angeles in 1984. Many Olympic Swimmers and Divers have affiliations with this elite training facility.

Free viewers are required for some of the attached documents.
They can be downloaded by clicking on the icons below.