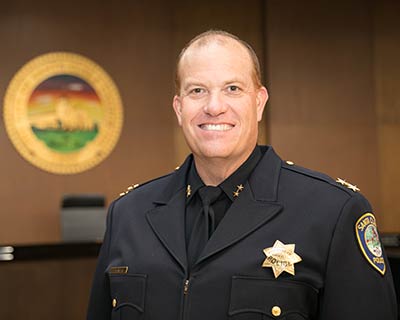 Assistant Chief of Police Daniel Winter began his Law Enforcement Career in 1988, when he was hired by the Long Beach Police Department as a Level I Reserve Police Officer. As a reserve police officer, he worked numerous assignments including narcotics and vice.  In 1991, he was hired by the Los Angeles County Sheriff’s Department as a Deputy Sheriff. While working the L.A. County jails, he received praise for developing an administrative segregation module for the system’s most violent inmates. In 1994, he began working for the Pacifica Police Department. At the Pacifica Police Department he rose to the rank of Corporal after being a field training officer and crime prevention officer.

He was hired by the Santa Clara Police Department in 1999. As an officer, Dan worked patrol and was later named the department’s first ever recruiting officer. After developing the department’s recruiting program, he was promoted to the rank of Sergeant in 2002.

As a Sergeant, Dan was assigned to the Field Operations Division, where he worked as a patrol team supervisor and field training sergeant. He worked in training briefly, before being assigned to the Professional Standards Unit as the Internal Affairs Sergeant.

In 2008, Dan was promoted to the rank of Lieutenant. He served as the dayshift Watch Commander and Traffic Lieutenant in the Field Operations Division before being named the department’s Communications Lieutenant. As the Communications Lieutenant, he supervised the 9-1-1 dispatch center and oversaw the department’s radio system. He has been integral in the creation of a new countywide Project 25 (P-25) public safety radio system.

In 2013, Dan was promoted to the rank of Captain. He oversaw the Services Division where he provided leadership to 75 full and part-time employees in 9-1-1 Communications, School Services, Nuisance Suppression, Training, Hiring, Crime Prevention, P.A.L., and Internal Affairs. On April 27, 2014, Chief Sellers and the City Manager promoted Dan to his current rank of Assistant Chief of Police.

Dan represents the department on interoperability issues throughout the Bay Area and serves as a Director on the BayRICS Joint Powers Authority. He serves the department as a legal resource for search and seizure and laws of arrest. He provides the department with annual legislative updates.

Dan’s charity work includes being the State Director of the Northern California Law Enforcement Torch Run for Special Olympics. He oversees and helps coordinate law enforcement personnel from all over Northern California as they raise over $1 million in fundraising for Special Olympics each year.  Dan is also the treasurer of the Santa Clara Schools Foundation and the Vice President of the Santa Clara Optimist Club.